Heeeeyyyyy lovely people :-) Why am I so crunk this morning??? I have nothing in particular to point out but I know that God is good and his mercy endureth forever. Oh yea, question answered :-) I would love to share with you all more pics from my fun weekend during the NBA All Star. See below for more fun and revelry. 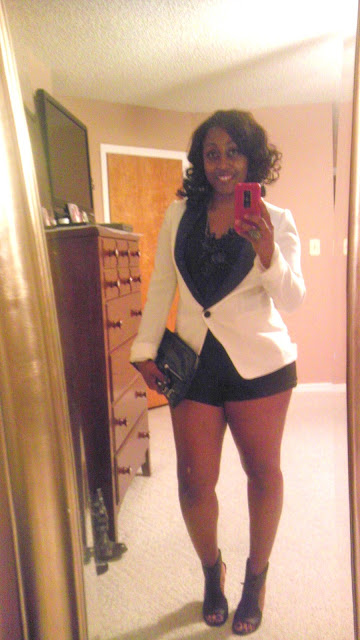 Obviously, this pic was taken on my Evo prior to leaving the house. You can tell because, as you move down the photos below, you will see less and less curl definition. The phone takes great photos but I kind of made it fuzzy when I tried to use my photo program on it :-(

I went for the sexy menswear inspired look It was a grown and sexy event so I tried to keep it pretty classy. But you know I had to let the thick legs out, LOL. 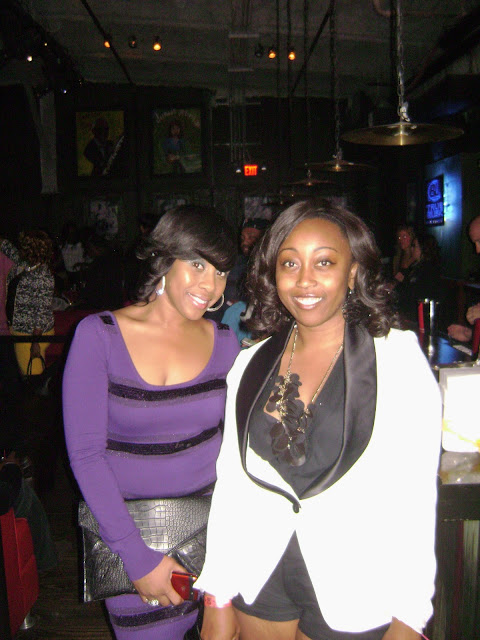 Me and the homie Dawana!!! Hey friend *waving* Of course we were up in VIP kicking it. But we missed the memo to secure the VVIP area (very very important people). That was the one held down by the celebs. But its all good. We still rocked it with them. 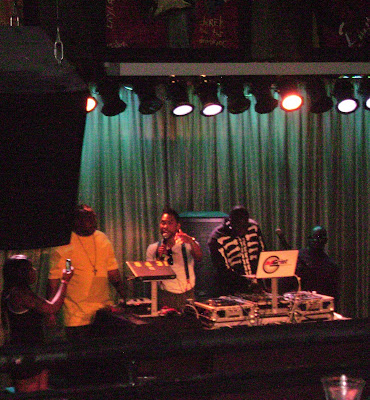 Here is the talented R&B singer Miguel on the mic. You know they had to jump on and let the people see them and perform little snippets of their hit songs. He's a super cool dude but he had on the most suspect outfit....with an even more suspect hairstyle (think press n curl). Soooo.......here is a l'esson learned' I'd like to share with you all: Don't ever let a drunk guy take your picture. You talk about someone that was upset!!! Not at him....but darn sho'll upset at myself. SMH. Anyhew, I don't know who the guy in the background was. I assume he was Miguel's bodyguard or sumthin'. 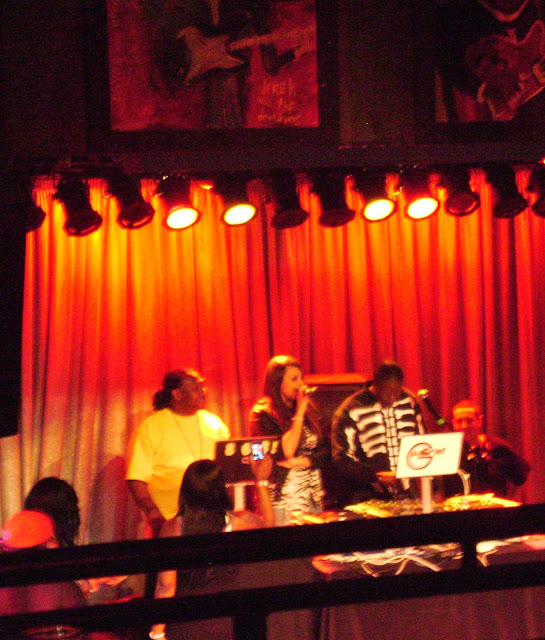 R&B/Neo-Soul singer Marsha Ambrosia was in the building. Let me just say that I love when I meet someone I admire and support and they actually turn out to be really good people. This lady is F-A-B-U-L-O-U-S!!!! She was funny, cool, and made sure to show love to everyone she came into contact with.

And don't let me start on her voice. It is like an instrument. If you have not purchased that "Late Nights and Early Mornings" CD......you are missing a serious treat....trust me. 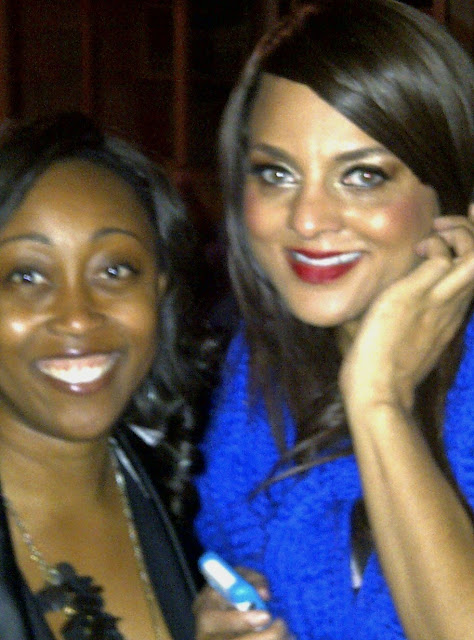 Yea, yea, yea, I know I'm cheesing hella hard but whateva. I wasn't star struck, but I was happy that she was such a cool person.
Now this pic isn't that clear because we were walking backwards because there was some guy stalking her. It was pretty scary! 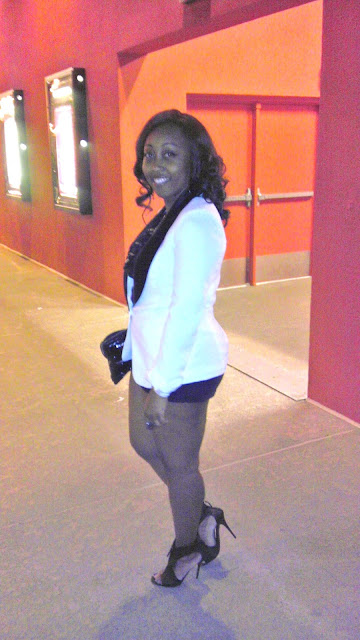 Now on to my outfit.......I have been saving this blazer and these heels for a really special occasion. That party was super nice and the crowd was fully grown. Model Keyshia Dior was also in the building but we didn't get a chance to mingle with her. 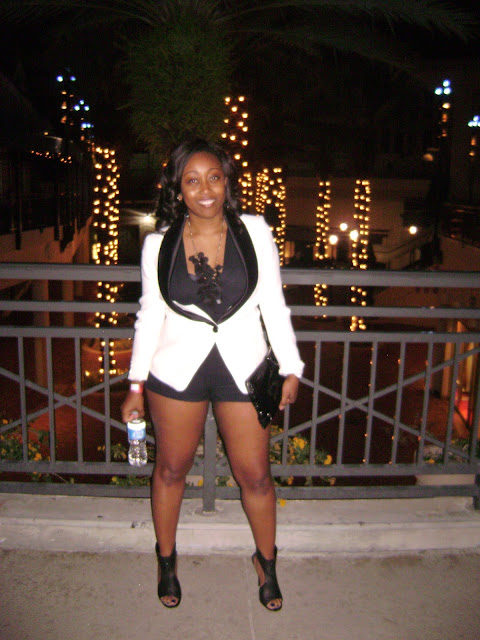 Dawana is fired from being my photographer as she did not even think to tell me to straigten up my tux......I look so disheveled!!! That heffa, lol.

Oh yea, quick funny story. So the drunk dude bought me some water and asked me for my number. Well I got his first and then called him. I guess he forgot about me that quick (impossible btw) because he called me less than 10 minutes later and asked, "who is this"? LMBO. He tried to holla the next day but I could not date him after seeing how sloppy he gets after a couple of drinks. No way! 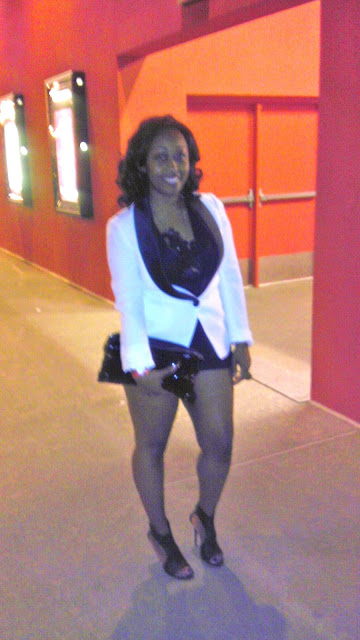 Whoo hoo! I love this picture because I look smaller. LOL! 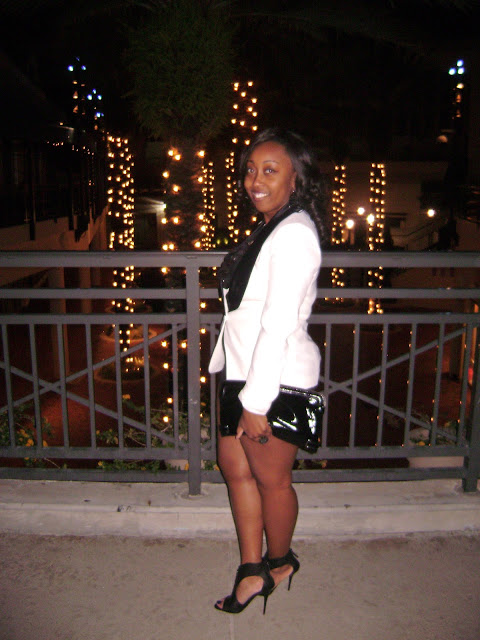 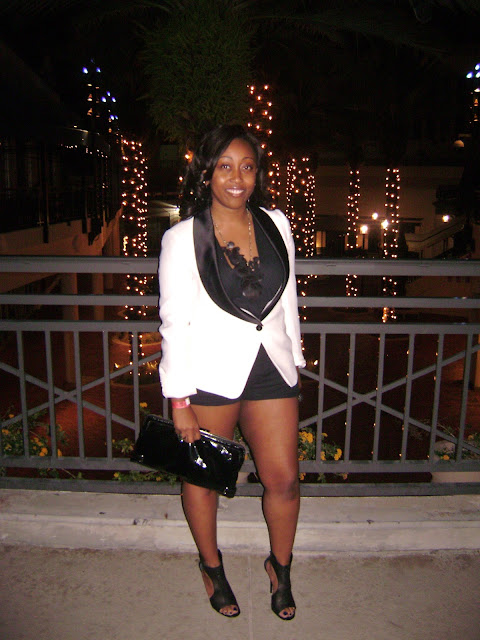 I need to get out more, I say that all the time, but I don't, LOL!! I will try harder though because there are so many places/events around Atl. I want to go check out.

Tierra said…
I LOOOOOVE this look on you. Them legs lookin nice! lol
I also love that dress you wore with the bow in the back.. and your shoe game >>>

Style4Curves said…
LOVEEEEEE this look I have the same blazer I've been saving for a special occasion
www.style4curves.blogspot.com
March 5, 2012 at 8:54 AM

Baby Budget Blog said…
Ah, that white jacket with the black lapels is AWESOME! Great way to throw in the menswear look! Love the tux feel to it all and then the super short shorts!

DOWNTOWNCHICAGOBARBIE said…
You look so classy... Keep it classy all the time. I laugh when you said the drunk guy couldn't remember who you were. That is exactly why I don't give out my number at the bar.
March 5, 2012 at 11:07 AM

Anonymous said…
You look hot...I looooooooooove your blazer, kindly let me know when you will be hosting a giveaway :))

Unknown said…
I love this outfit! The blazer is stunning.

G. said…
Absolutely FABULOUS! You are working that outfit.

Anonymous said…
Miguel is super suspect and I refuse to believe anything different. lol. I Love MARSHIA!!!!!

Unknown said…
You look fab, the mens inspired look was pulled off wonderfully & those shoes are to die for..you look great as always! seems like you had an amazing time I absolutely love miguel he's so cool & his songs are great!
March 5, 2012 at 3:21 PM

RochellekeCloset said…
Wot Wot!!! hottie!... you make me laugh while reading all your story...you seem a fun person to go out for a party!

Unknown said…
Check you out my friend! Killer legs you have! You look fabulous like always and I hope everyone had a great time!
March 5, 2012 at 4:35 PM

Unknown said…
You look great pretty girl I am loving the outfit.

Miguel is cute but yes I question his wardrobe also.
Let's hang out when I come to your city because you be front and center everywhere you go.

Carrymel said…
Wooooh, check out those legs! lol You look great, hun, and I love your tuxedo blazer!

Beauty or Swaag said…
i swear i just need all of your clothes loll. you look great girl!

Sazi Efionayi said…
now u are working it gal,i can see u and miguel(coughs)....u look very cute darling as always

But u was crunk bcuz u know that God is good and his mercy endureth forever. That in itself is ENOUGH to be CRUNK about!!!!

Tavia Mac said…
Girl you are looking suuuuper sexy! Work work work! It looks like it was a really interesting evening.

As for Miguel, I saw him last summer and I said the same thing about his outfit...SUSPECT! LOL