Happy Friday! We're rolling full speed ahead into a new year and I, for one, am so excited!!! I have old endeavors to complete, but new adventures to begin. But first, I have to set my short term goals so that I can stay focused on what's priority in my life. I'm an Aries and we tend to take on more than we should because we're so dang ambitious....and utterly insane! I'll have to keep you all informed about how that's working out throughout the year ;-)

Last Friday, my bestie and I visited a lounge that was tucked off in the middle of the downtown area. I swear I never noticed this spot before but it was pretty darn spacious. There was an event taking place that featured new and upcoming musical artists able to perform their work before a really receptive audience. In addition, local artists and entrepreneurs were allowed to bring in their wares to sell and market. At first, I was like, OMG....this crowd looks hella young and had more of a "skateboarders" vibe. However, as we began to wander around, we realized that the crowd was more versatile than we originally observed. Much better. 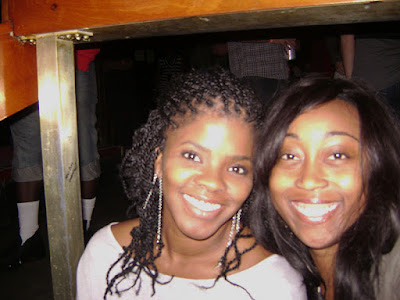 The bestie, Ann Marie, and I....taking photos all throughout the event, lol. 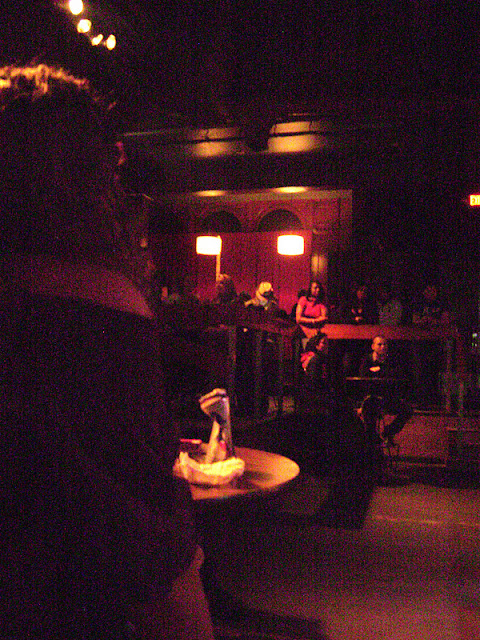 This is a horrible photo of the scene....and its people. My camera was so shady that night!!!! 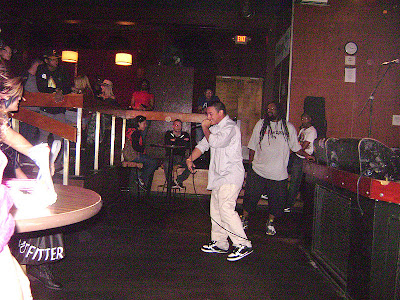 This guy is a supa fab lyricist!!! I see big things for him if he's picked up by a label. The boy is HOT! 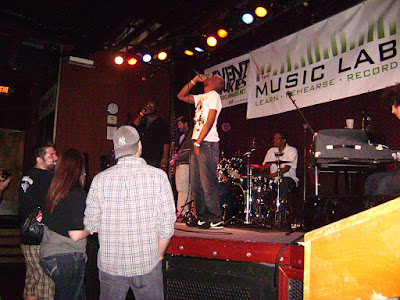 We were so shocked when a band filled with "nerds and awkward misfits" stepped on stage......wth? However, I was pleasantly surprised when they dropped that first beat. I was sprung. All instrumentals used in their performance was live and I have MAD respect for that. 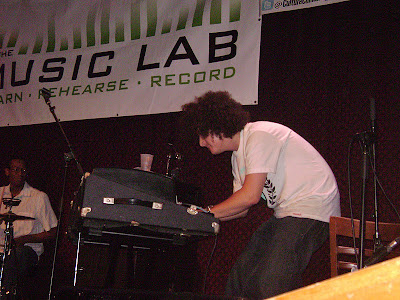 His hair was the star of the show.... 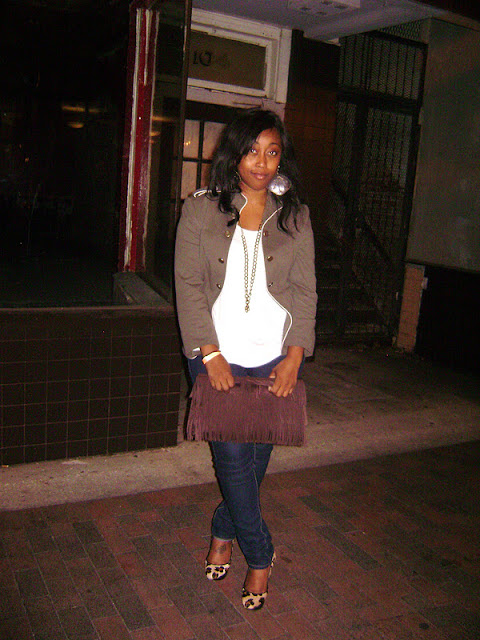 I wore my fav "go to" outfit for the event. Found this lovely cotton blazer on sale and I jumped at this purchase. I swear I have rarely seen some of the sales clothes on the full price rack......I think they probably take inventory directly from manufactures that do not "meet inspection" but I'm not clear.......anyone else believes this? 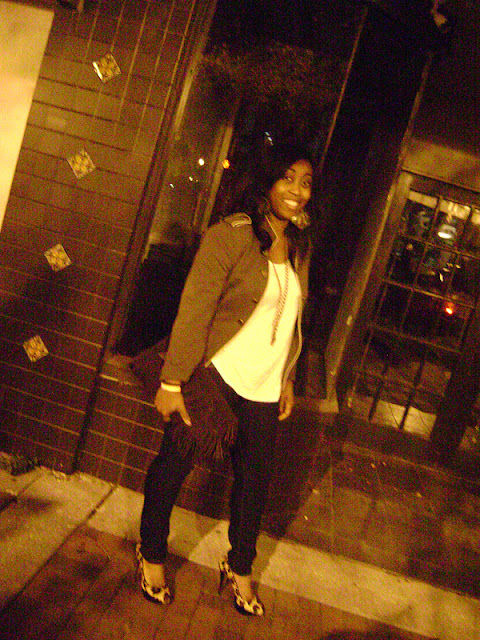 I brought out my "neutral" heels and throwback gold chain to rock the look. 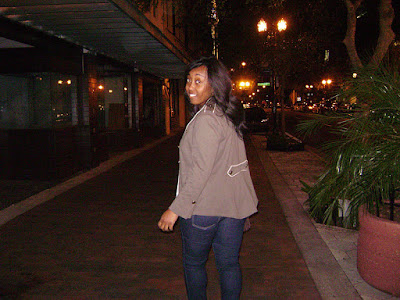 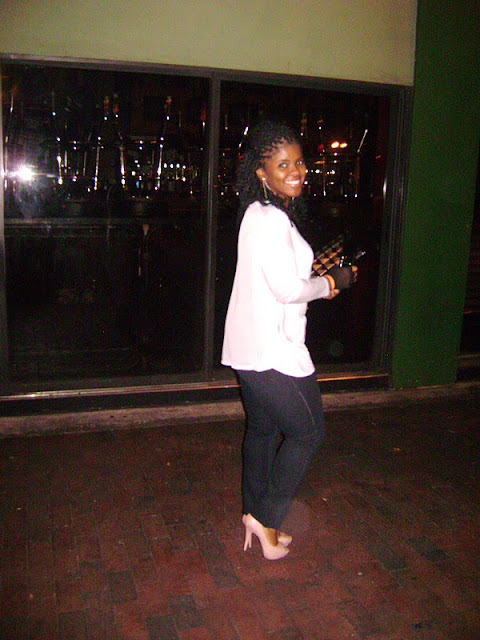 My bestie was super fly and I loved her top so much that, besides threatening to steal it from her, I actually purchased several the very next day. I can't believe that heffa was holding out on me....LOL! 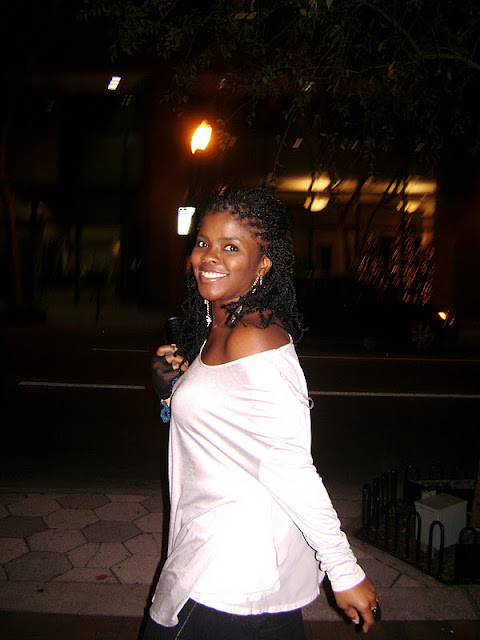 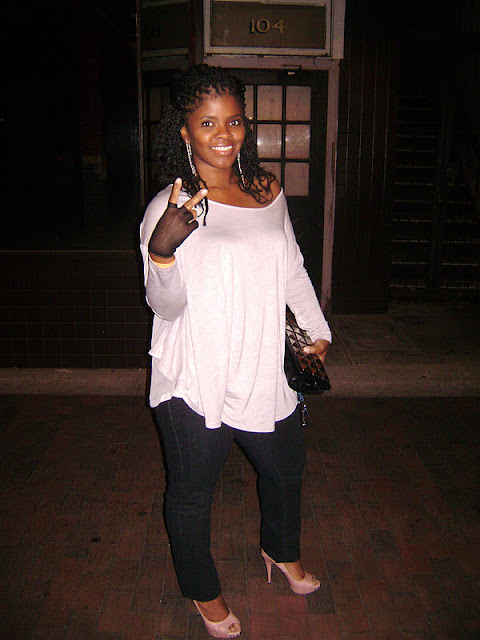 Looks like I'm also going to take her fishnet gloves and pink blush shoes, lol. Her gloves are from Asos.com. When Asos developed a site of operations in the US....the poor company had no idea what they were getting into. I know I contributed heavily to their bottom line ;-) 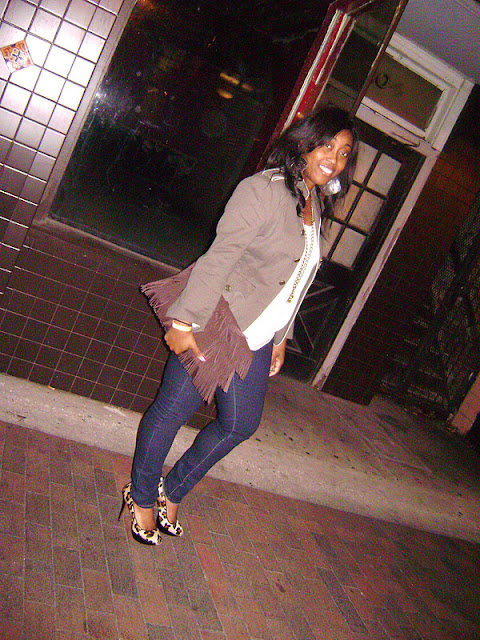 We had sooooo much fun and I'm glad I didn't back out due to, initially, fatigue. This party allowed me to network with a ton of people. The host did a fabulous job as well. 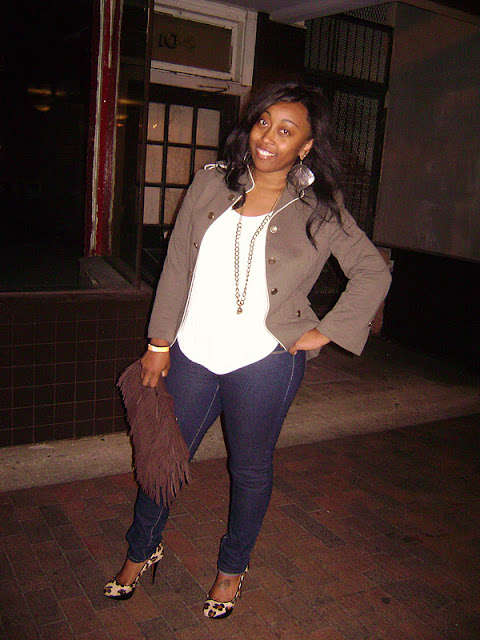 High Heels & Good Meals! said…
SO I totally should be in bed right now but anywho...lol... SOunds like you two had a great time! You both looked really cute. I love your blazer and your friends flowy top and cut-off glove!
December 30, 2011 at 6:06 AM

Unknown said…
I am loving your clutch and pumps! Both you and your friend look fabulous! I need to find some new places in my city to visit because i am so sick of the night club scene already. Great post!

~Style Bot~ said…
That is definitely my "Go-to" outfit too 1)Fabulous jacket/layering piece 2) Cute top 3) "made for me" jeans 4)Amazeball shoes 5) Statement accessories. Needless to say you look gorgeous! BTW, I love ANY kind of live performance, well, legal/savory, LOL! My husband does stand-up comedy and my daddy is an actor, director, writer. Plus, I am a dancer and I played violin for years. I just saw The Laugh & Love Tour w/ Erykah Badu and Eddie Griffin last night. It was AWESOME!

Marcela Gmd said…
Hi lovely, I wish you all the best for the new year! ;)

Tereza {Drastic Plastic} said…
I want to wish a Happy New Year and all the best in the world. Thank you for being next to me in this amazing blog world.
December 30, 2011 at 2:46 PM

Fashion Pad said…
@StyleBot..OMG, I danced on my university's dance team AND I played the violin from elementary school through high school! Cool beans!!!
December 30, 2011 at 6:54 PM

Brigita said…
Sounds like a good time spent together. There`s nothing better like a good evening with friend in an amAZING OUTFIT!

Come and visit me (:
http://lostinpattern.blogspot.com/

Ticka said…
I am falling over that bag, the shoes and that jacket! You look so cute!!

I think I might have to go out in search of your friends top as well. Prepare to see it soon! lol!

Sincerely Coco said…
those shoes and that bag are hawtness!!!

Zuqueta said…
You look like you had a great time. Both of your outfits were sooo cute. I love her top and your blazer and shoes are haute!!! And I too am adding to ASOS' profits.
December 30, 2011 at 10:09 PM

notanymore said…
Nerds and misfits can jam, too.

Unknown said…
As stated before you guys look gorgeous and I want both your shoes, and that clutch is fab girly! Love your posts, they make me laugh all the time, looks like you ladies had a great time! Have a safe and Happy New Year! Look forward to what's to come in 2012 :)
December 31, 2011 at 6:10 AM

Barbara von Enger said…
What a delightful picture of you and the best friend. And as I can see from the pictures everyone was in such great form. Here's to a fanciful new year;-)
December 31, 2011 at 1:08 PM

Sincerely Mally said…
I wish you all the best in 2012 doll!! You and your bestie both look flawless! BTW - FedEx me your clutch lol

E. Louise said…
This Jacket is too cute! I bet it's really comfortable too!!

Confessions Of A City Girl said…
Aww you both looked very nice. Seems like fun times!

Thick Chick said…
Thanks everyone for the compliments- I have to step it up when I head out with @Fashionpad. ;-) My top is actually from Lola by BCBG. @ Fashionpad...that anonymous is suspect-lol
January 2, 2012 at 1:40 PM 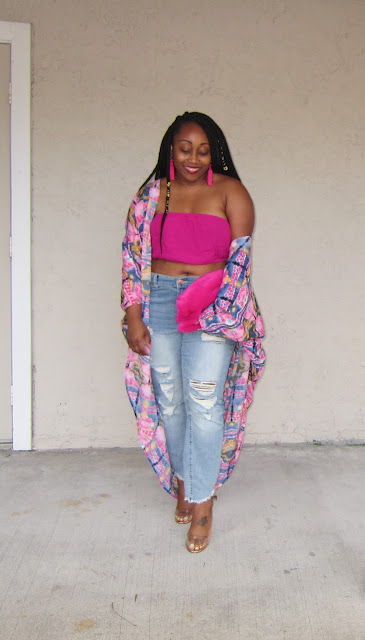