I hope everyone had a fab weekend! I shopped a little, went to church, and finally was able to clean my home. While at the mall and designer outlets, I noticed something pretty shocking.....they're were tons of people out shopping! It's shocking due to the fact that retailers are reporting a loss in profits because of lower revenues, the job market report for the month of October was the worst yet this year, and the shopping season doesn't usually pick up until the day after Thanksgiving Day. Weird!

Oh well, the retailers had some great deals this weekend so of course I was gracious and purchased a couple of items to show my support. LOL! However, my favorite purchase had to be a pair of patent knee high boots from Nine West. They're too cute! 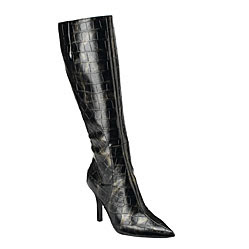 And when I got to the register, they took an additional 25% off. I so love a surprise discount! These boots remind me of Ashanti's boots that she was rocking at the CBS Early Show in New York last week. 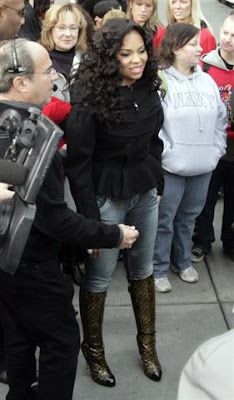 I also love the jacket she's wearing as well. The military detailing down the front of the coat is off set beautifully by the ruffles along the edge of the coat.